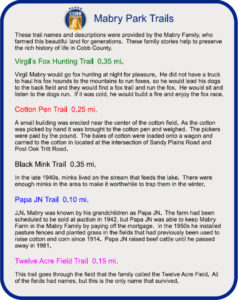 These trail names and descriptions were provided by the Mabry Family, who farmed this beautiful land for generations. These family stories help to preserve the rich history of life in Cobb County.

Virgil Mabry would go fox hunting at night for pleasure, He did not have a truck to haul his fox hounds to the mountains to run foxes, so he would lead his dogs to the back field and they would find a fox trail and run the fox. He would sit and listen to the dogs run. If it was cold, he would build a fire and enjoy the fox race.

A small building was erected near the center of the cotton field. As the cotton was picked by hand it was brought to the cotton pen and weighed. The pickers were paid by the pound. The bales of cotton were loaded onto a wagon and carried to the cotton in located at the intersection of Sandy Plains Road and Post Oak Tritt Road.

In the late 1940s, minks lived on the stream that feeds the lake. There were enough minks in the area to make it worthwhile to trap them in the winter.

J.N. Mabry was known by his grandchildren as Papa JN. The farm had been scheduled to be sold at auction in 1942, but Papa JN was able to keep Mabry Farm in the Mabry Family by paying off the mortgage. In the 1950s he installed pasture fences and planted grass in the fields that had previously been used to raise cotton and corn since 1914. Papa JN raised beef cattle until he passed away in 1981.

This trail goes through the field that the family called the Twelve Acre Field. All of the fields had names, but this is the only name that survived. 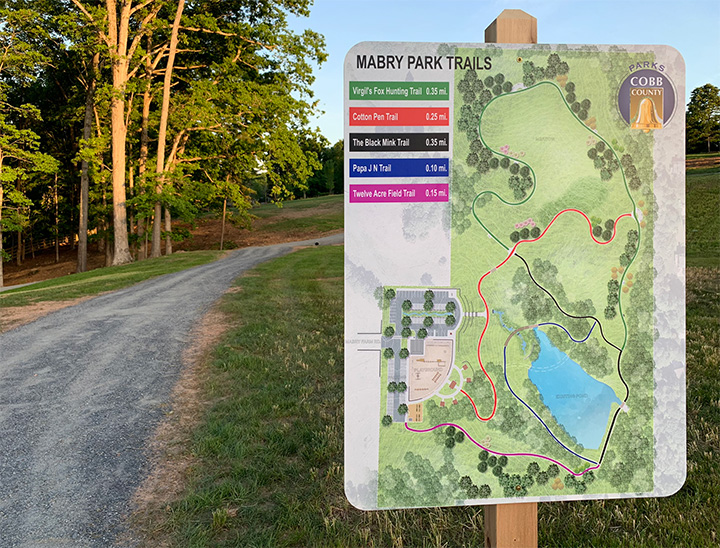 The Mabry Park property
is owned by Cobb County.
Friends of Mabry Park is a is a
non-profit 501 (c) 3 organization